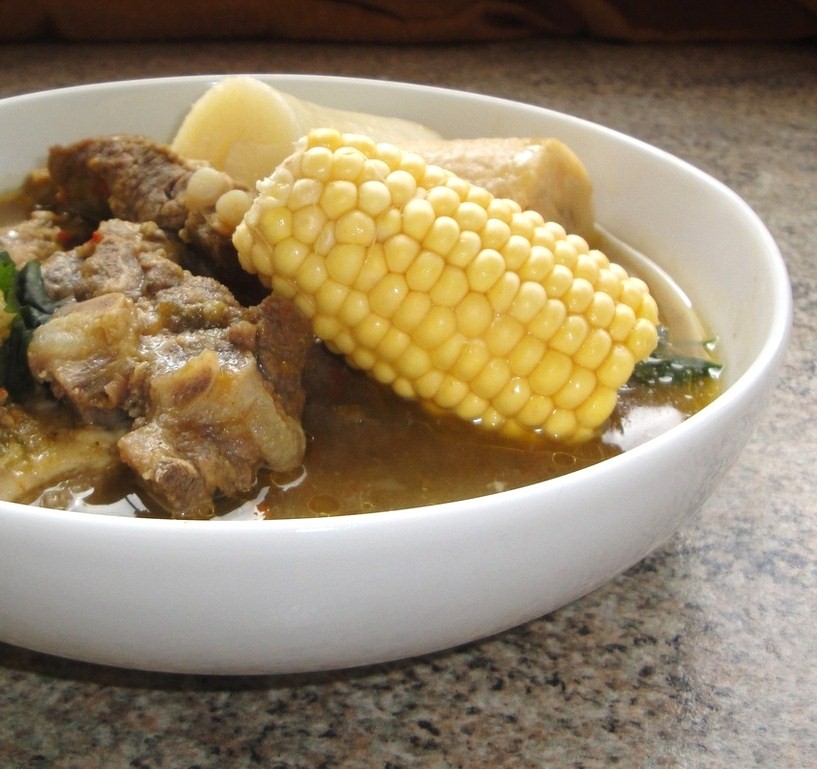 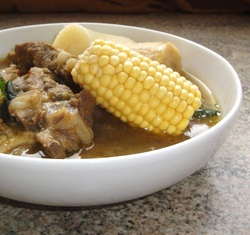 By Simbooker on the 11th JULY 2014
Files & Tags: recipes, index, soups and stews, caribbean & latin american, potatoes & root vegetables, plantains and fruits
I love Sancocho. It's one of my favourite soups/stews. I like to make a huge pot and just eat it concurrently for days. It's one of the few dishes in the world that I can seem to eat for days and days, without yearning for something else. Sancocho is a HEARTY DISH that is popular in several Latin American countries. It's very similar to soups and stews that we have in Jamaican cuisine, AND other cuisines across the Caribbean. 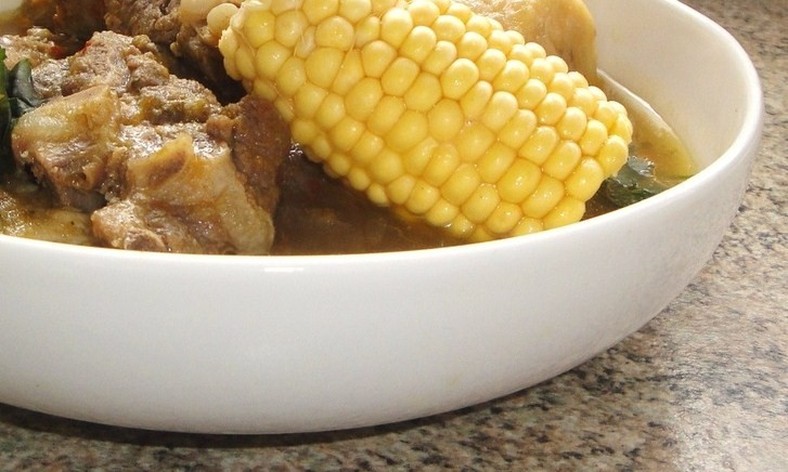 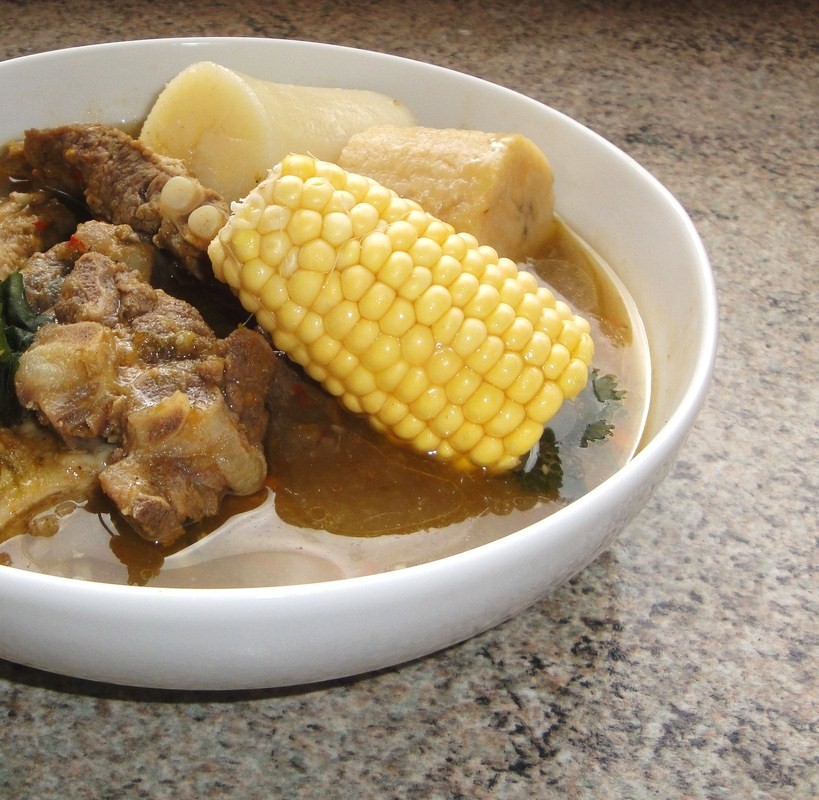 This hearty dish seems to be the most popular in Panama, Colombia, and the Dominican Republic. But there are other Latin American countries that also have Sancocho as part of their culinary dish.I decided to make a three meat Sancocho, consisting of pork ribs, goat, and beef. It turned out excellent. It was exactly what my body needed. 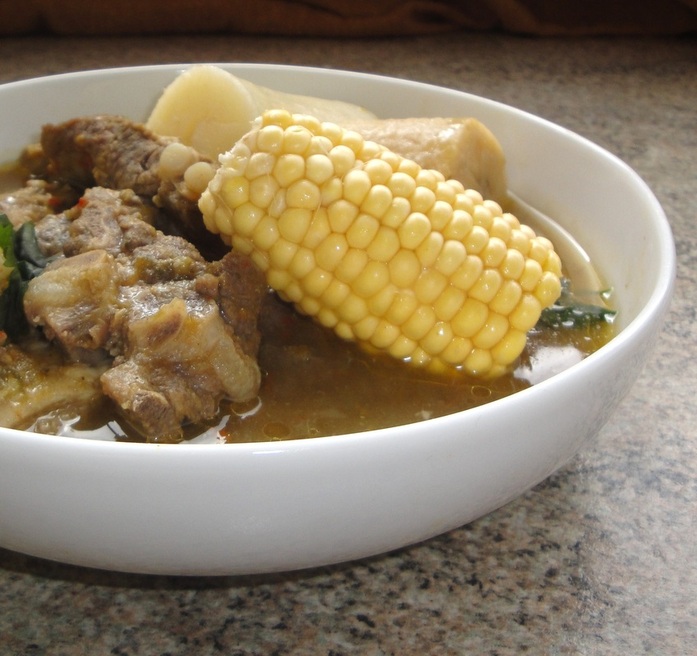 Dominicans, claim they make the best Sancocho, but actually this dish originates in Southern Europe, specifically the Spanish-Canary Islands. There are many different variations of this soup, and you can use any meat or combination of tubers that you want. 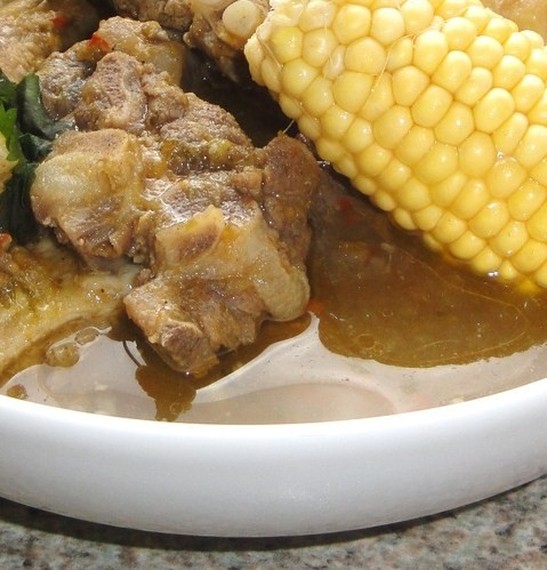 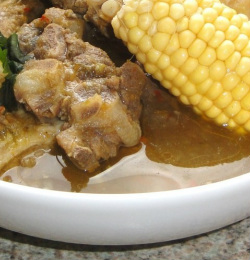 
THE METHOD-THE TUBERS
.Peel the yam or yuca, and plantain AND THEN Slice and Cut the yam/yuca plantain into DESIRED chunks and add them to a large plastic bowl of SALTED water. *Slice the yam/yuca as if they were potatoes that you're adding to a soup. And as for the plantains cut them AS YOU WOULD BANANAS, into larger or smaller pieces.

.Then transfer the bowl of yams/yuca, PLANTAINS, to a large pot, with the same water, MAKE SURE THE WATER COVERS THE TUBERS. Turn to high heat and Bring to a boil. Boil for approximately 20 minutes (guideline only) until you can stick a fork through the yam or yuca, and they have a visible sheen. Test with a fork before you turn the heat off. If it goes through easily and it has a visible sheen it's done. Leave them in the water they've been cooked in to prevent discolouration. Let the tubers cool AND store them separate from the soup in an air tight container filled with the water they were cooked in. THIS IS A MUST OTHERWISE THEY COULD TURN BROWN OR BLACK!

THEN TURN YOUR OVEN ON THE HIGHEST HEAT. TAKE THE SQUASH AND PLACE IT ON A HEAT POOF TRAY AND BAKE THE SQUASH UNTIL IT BECOMES SOFT. Peel the skin, cut up the squash, and add it to the pot at the start of cooking. This will be the base of the soup stock. 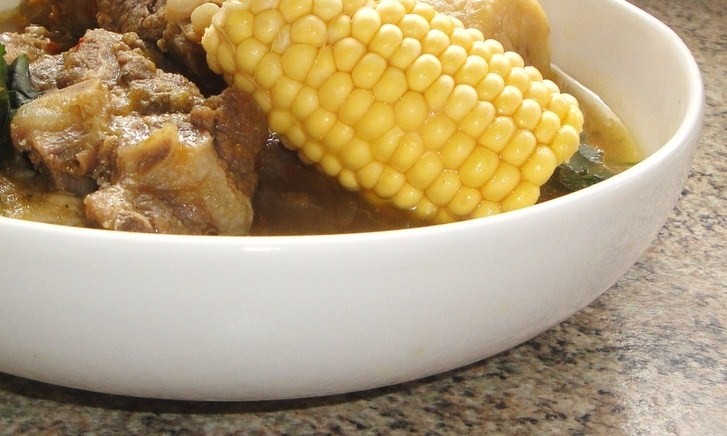 Now you can concentrate on the soup, and you can add the tubers to the SERVING soup bowl once it's finished cooking.


Wash the meats separately with water and lemon juice and drain. Sprinkle 1 tsp of salt, and 2 tbs of light Soy Sauce evenly over the meat. Rub this in so these ingredients are spread as evenly as possible.


Add about ten cups of water to a large pot, bring to a boil.


Then add the yellow onion peeled, but kept whole, add the garlic bulb; just cut it in half down the middle but not straight through. Chop up the entire Bell Pepper into small pieces and add to the pot, seeds and all. Add the Beef Stock Cube. And add at least a teaspoon of salt and pepper.

In a wide frying pan or iron skillet. Turn heat on high, and add 5 tbs of Cooking Oil. The oil should take about five minutes to get searing hot. Once hot turn to medium heat and add all the meat. Sear this meat on medium, or medium high for about six minutes. You may have to do this in batches. Overcrowding the pan will lower the temperature, but you can get away with searing all the meat sufficiently by keeping the temp on high heat, if you prefer to do this stage quickly.

Once finished remove from heat, and once the water is boiling in the other pot add the goat. You must add the goat 50 minutes before you add the other meats as it will take longer to cook. Once the goat is add simmer on low heat, and add the fresh Cilantro.

Once fifty minutes to an hour passes, add the beef and the pork ribs. Simmer on low for another 1 and a half, or 2 hours. Keeping checking for salt and pepper to taste as it cooks. In the last 10 to 12 minutes of cooking add the corn. 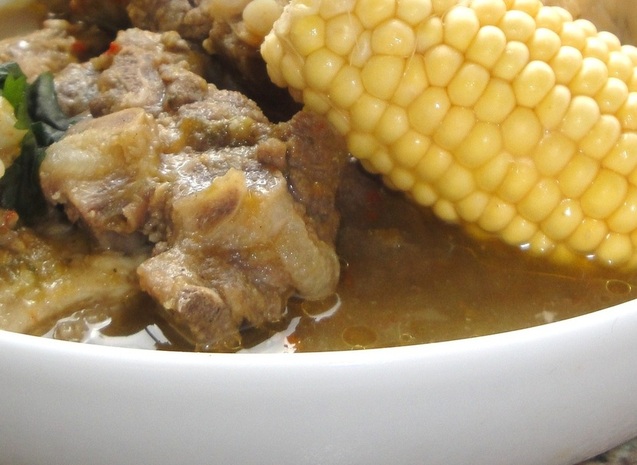