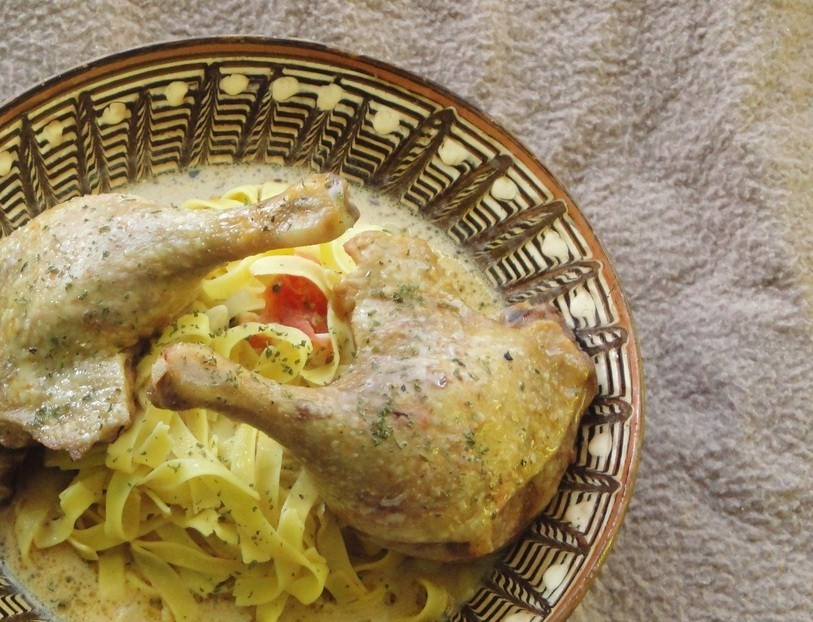 By Simbooker on the 8th of January 2015
Files & Tags: recipes, index, duck, italian and pasta, tomatoes
Every few weeks or so, I crave a delicious plate of pasta. I take pleasure in making the sauce; there are two distinct sauces I make for pasta. They are red and white. The red one is tomato based, the white one also has tomatoes, but tomatoes aren't the base of the white sauce. 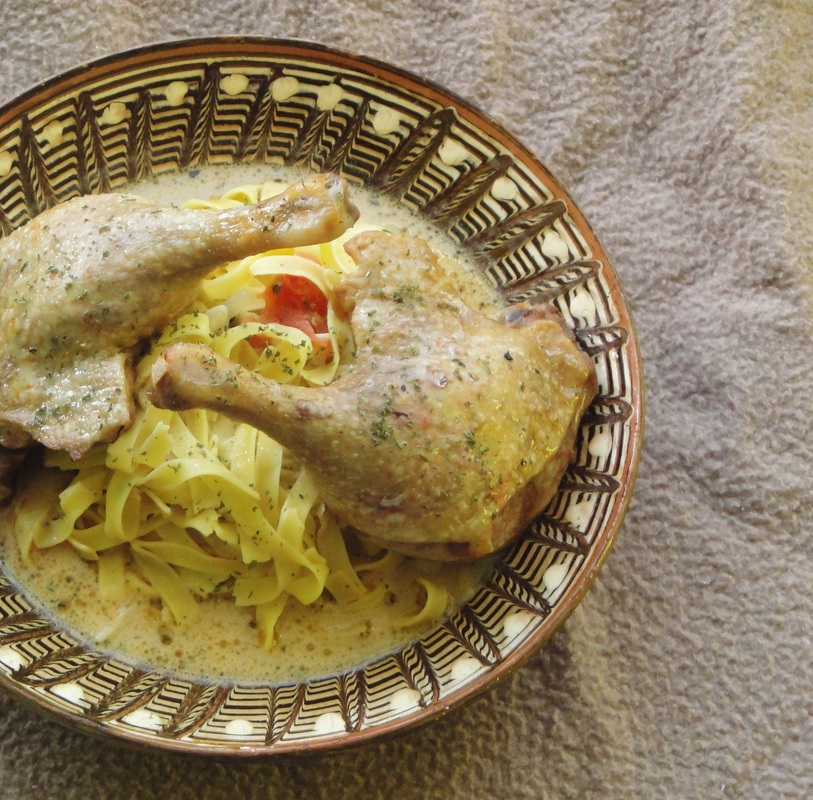 Then there is the standard sauce, which I used to make when I started making my Duck Linguine, it's a cross between red and white, but the sauce is thinner, and half of it is usually soaked up by the pasta. 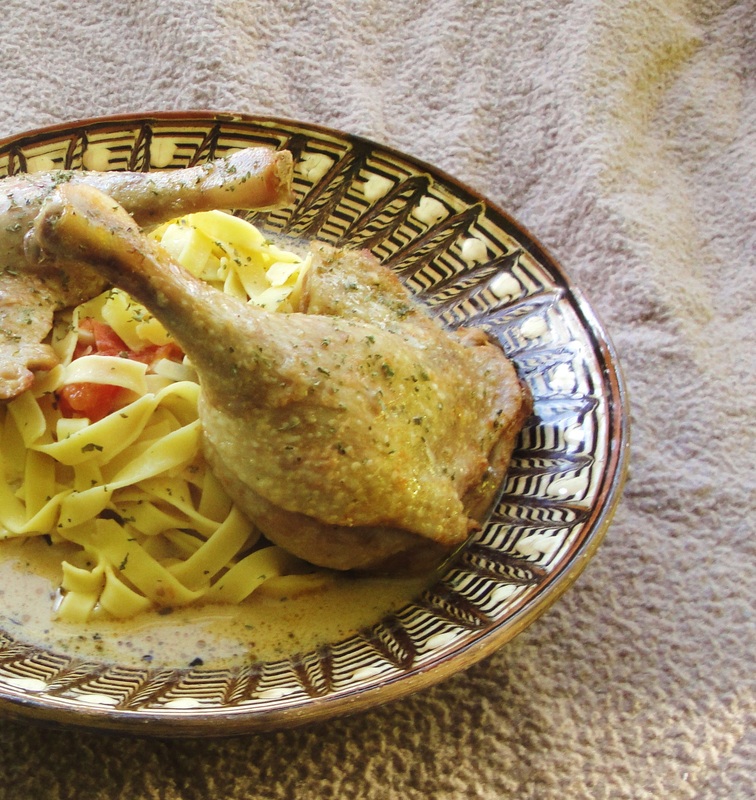 Months and months have past since I've devoured a delicious plate of pasta. I've had noodles, but not pasta. Every time I told myself I'd make some, my body called for soup. Or I'd feel a calling to cook a new more exotic dish. 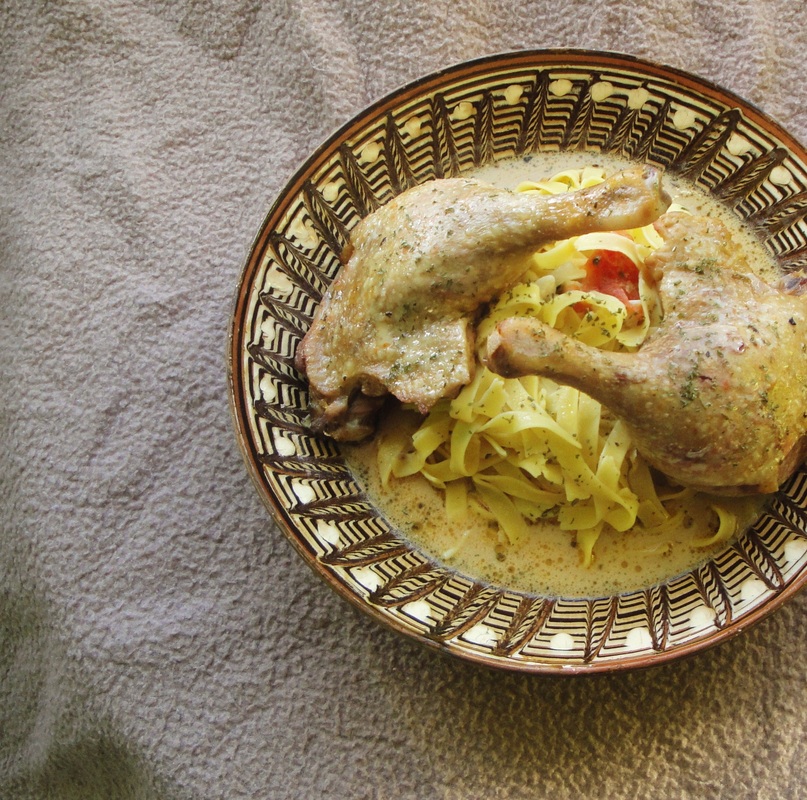 The time finally came for me to satisfy my pasta cravings with this sensational dish of Tagliatelle with duck. I'm a huge fan of duck, just in case you haven't noticed. 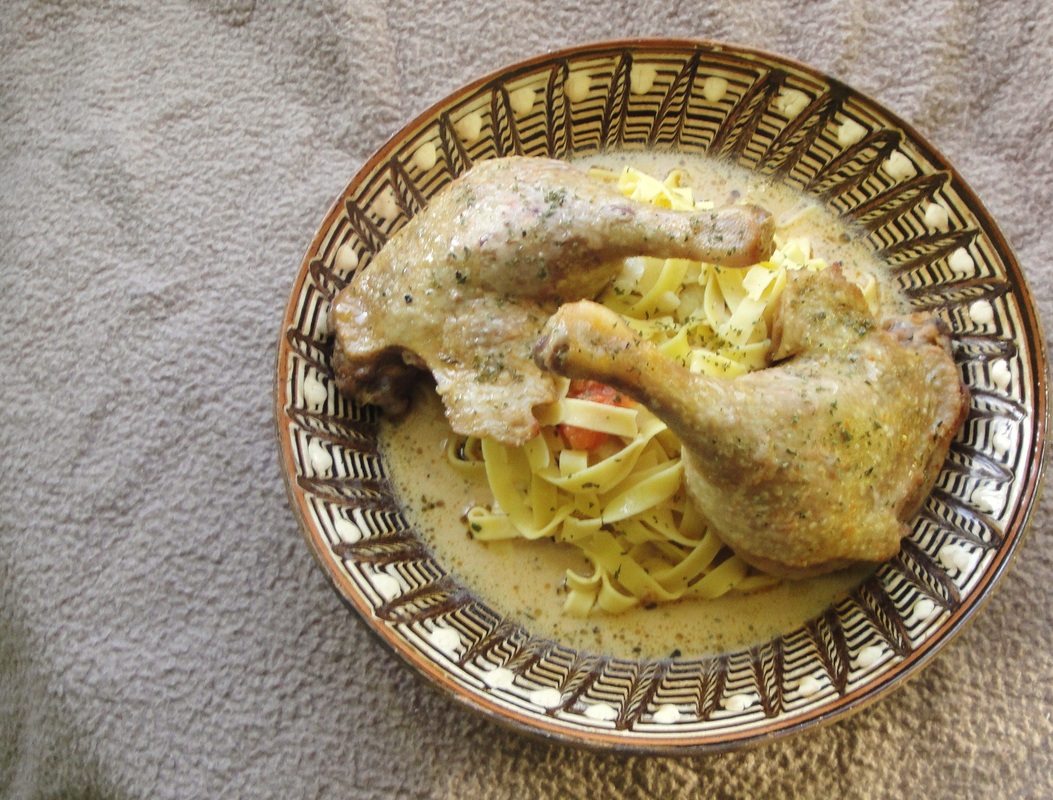 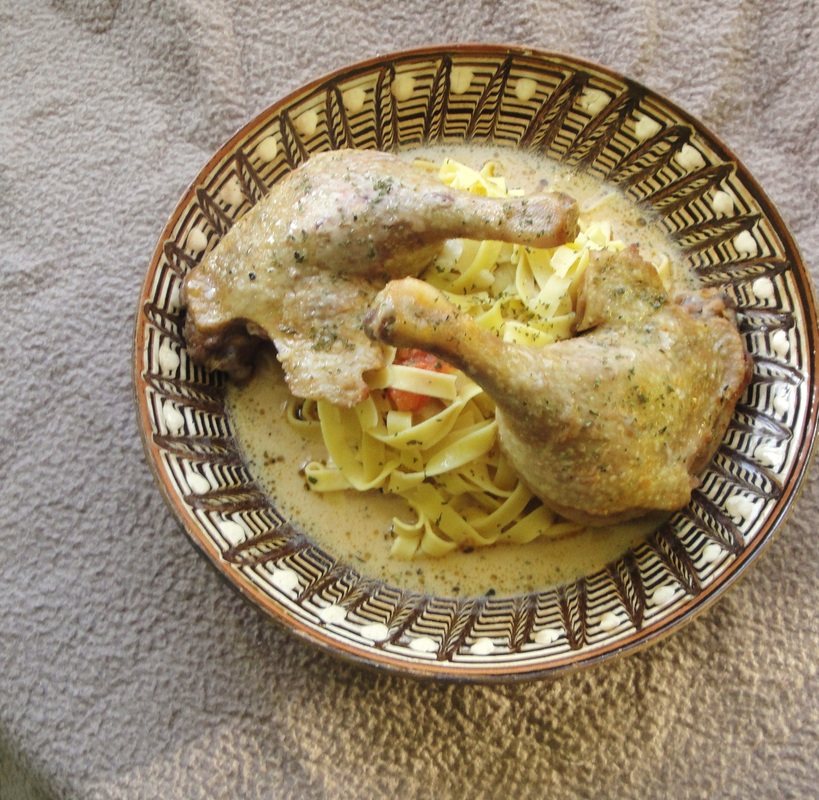 BOILING THE PASTA
Turn stove on highest heat and bring approximately ten cups of water to a boil. Just before adding the Tagliatelle generously salt the water and stir. Add the pasta and boil for 7-20 minutes depending on how al dente or not you like it. Strain most of the water, but not all, and set aside.

1b. Turn the stove to high and heat the oil. In the meantime sprinkle two teaspoons of salt over the ducks. Once the oil is searing hot add the ducks and sear on medium high heat for three minutes on each side (approximate)


2. Remove the Ducks and add the chopped onions, garlic and sweat this down for about five minutes, add the soy sauce half way through this time and mix in with the onion and garlic. 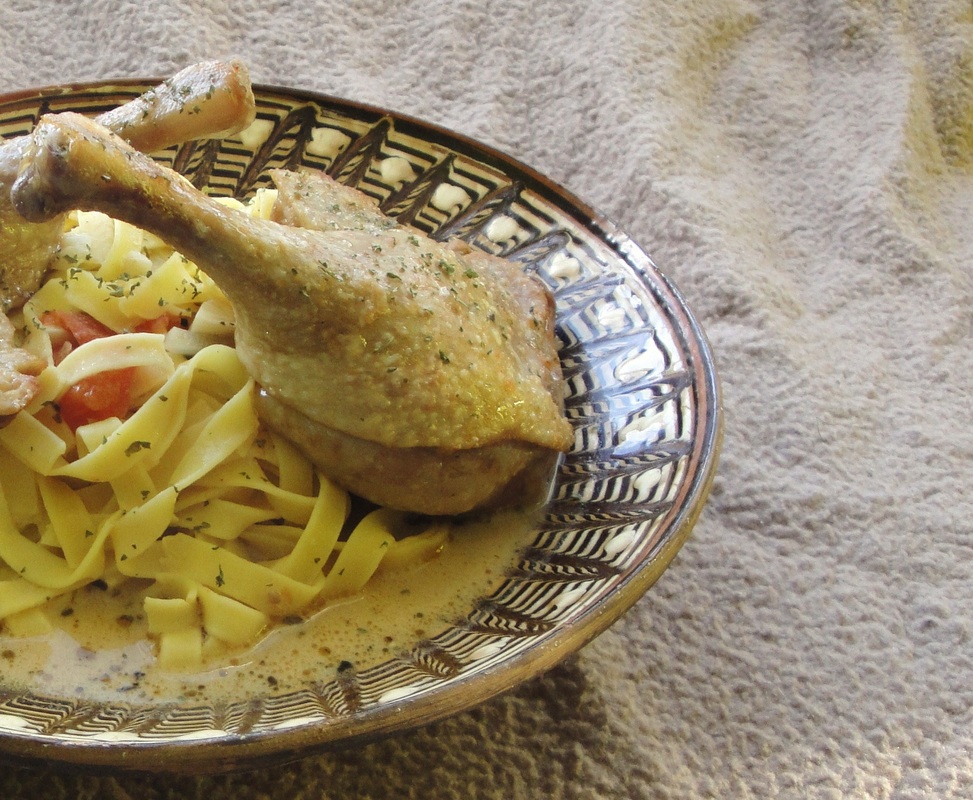 3. Add the water, then add the chopped tomatoes, the ducks skin side up, stir, and turn the stove to high, and bring to a boil for five minutes. Then, turn to low and cover, and simmer for about half an hour.

4. Turn the Ducks the other side and add the herbs, (basil and parsley), the cream and melted tbs of butter, STIR vigorously-ensure it doesn't curdle, and simmer for another half an hour, to forty minutes. 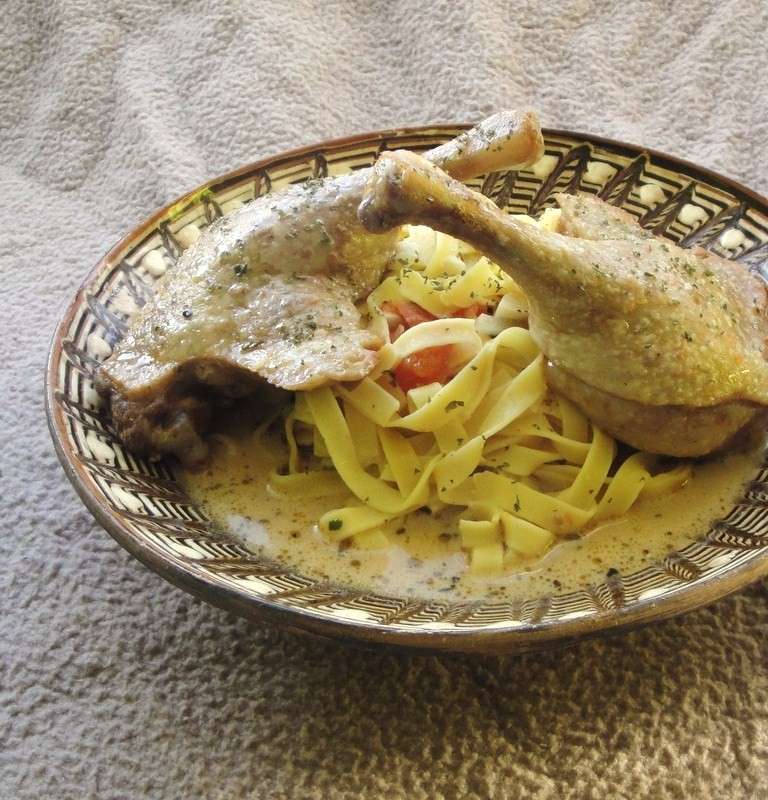 5. Finish the Ducks off in a high heated oven, skin side up for another ten to fifteen minutes, but continue cooking the sauce.


6. After the Ducks have been in the oven for fifteen minutes, add the boiled pasta to the sauce and cook for three minutes. Place the Ducks on top. 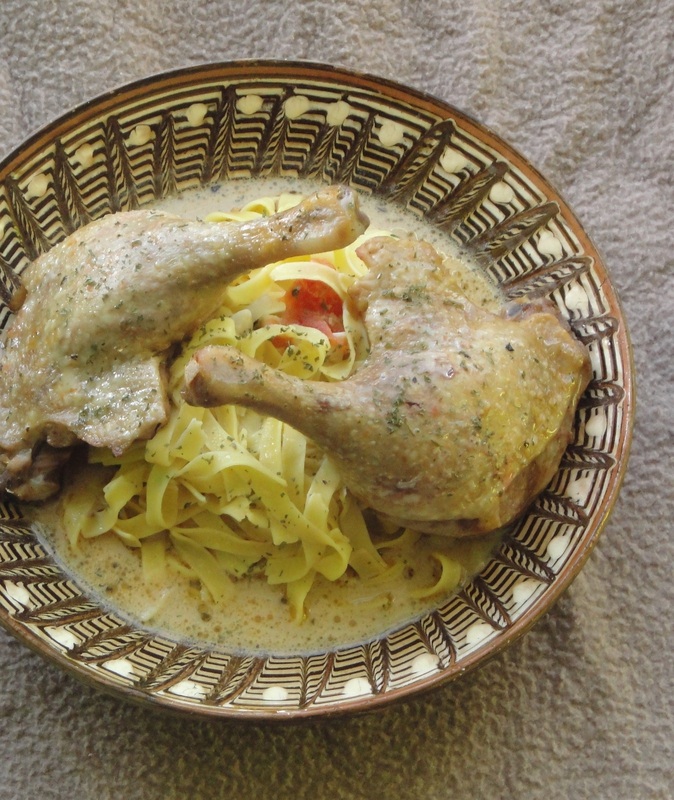 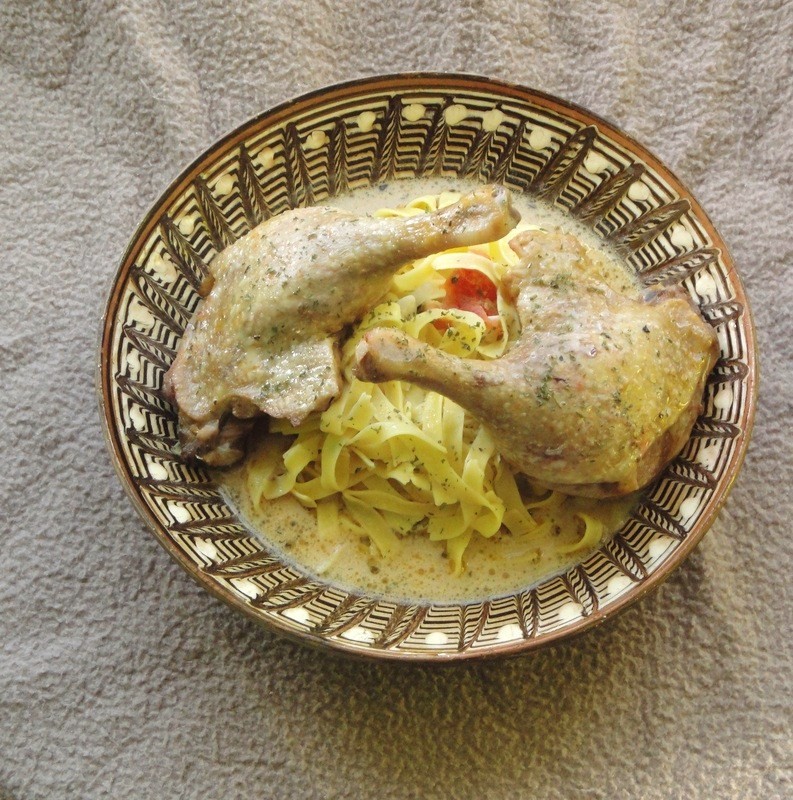