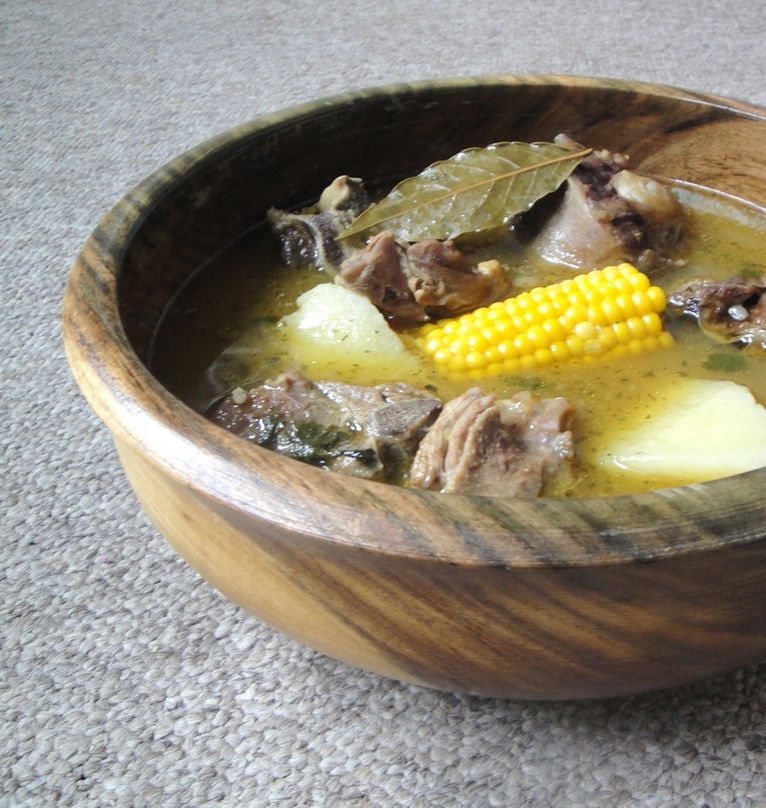 The National Dish of Panama

My maternal great-grandfather came from Colon, Panama and settled in Jamaica. Maybe that's part of the reason why I feel such an affinity with Latin American culture. But there is perhaps more to it than that. Jamaica is slap bang in the middle of the Caribbean, and right in the midst of Latin America. Mexico is not that far from us; on the top left, Cuba is just above us. The Island of Hispaniola shared by Haiti and the Dominican Republic
sits on the right, and just beyond that is Puerto Rico. 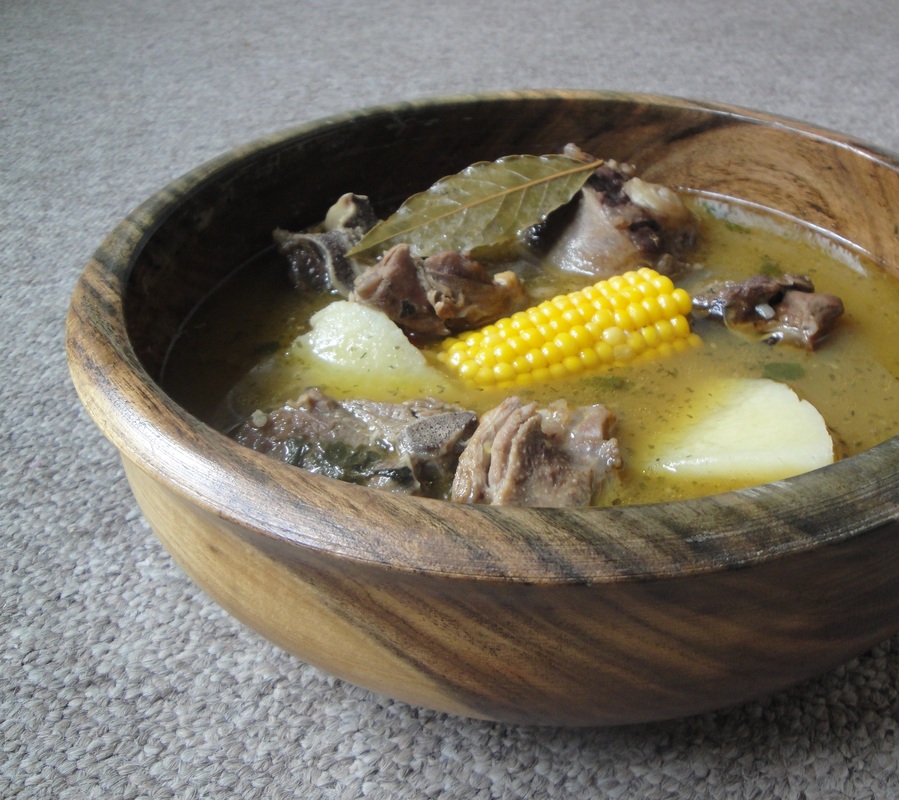 On the left spanning downwards, is Central America. Just beyond the other Caribbean islands, are places such as Colombia and Venezuela. Our foods share many similarities, even when they vary; reflecting the Indigenous, the Spanish, and the African parts of our history. There are other influences of course, but those three tend to be the main. Panamanian food is delicious and hearty. Some dishes are also heavily influenced by Jamaican food, because many Jamaicans settled in Panama after
the Panama Canal was built. 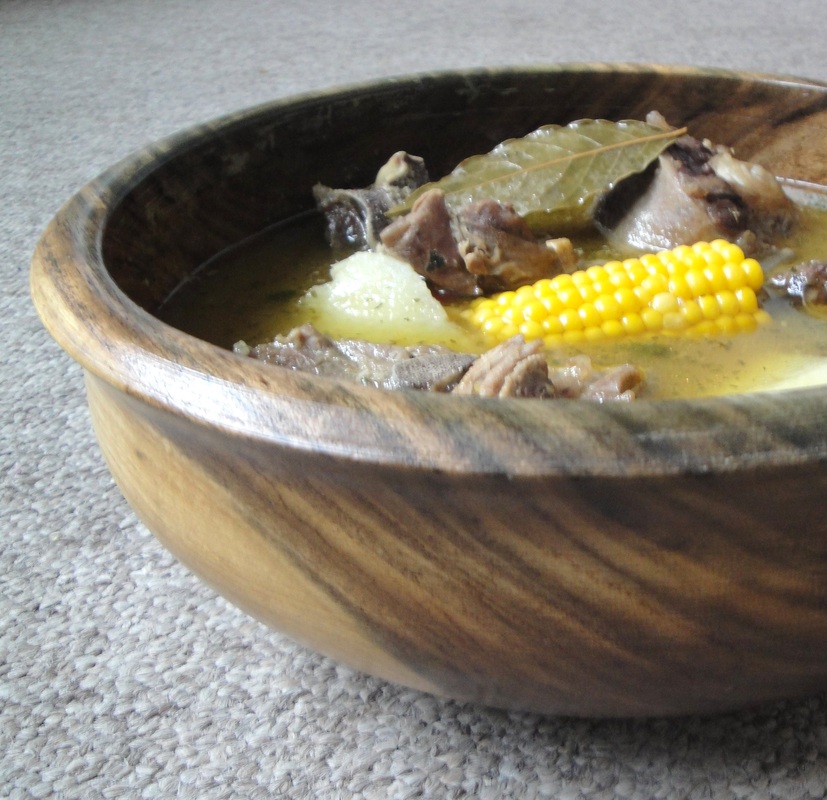 But in fact, it was a NO RESERVATIONS episode on the Dominican Republic that inspired me to make this. You see, Sancocho is popular in several Latin American countries. It seems to be especially loved in the DR, and with winter being cold and cruel in the UK, I decided a warm comforting stew, packed with different meats and starchy tubers is just what the doctor ordered. This dish sustained me for five days, and I never got tired of eating it. Each time I was hungry I craved for more.

I used three different meats in this soup, although Panamanian Sancoho is usually made with chicken (Sancocho de Gallina). I wanted to give the stock a range and depth of flavors. I used Oxtail, Goat and Duck. All the meats were on the bone, which I highly recommend. This gives the soup lots of flavor, and this is how it is commonly served.
I would not suggest or recommend using boneless meat. 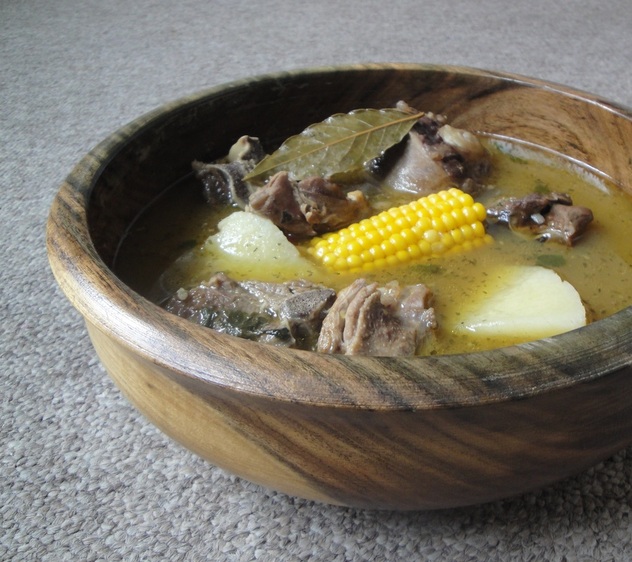 You will need a very large pot to fit all these meats and ingredients. Feel free to subtract or reduce to your needs. You can always choose whichever meats or tubers you want. You may decide to only use beef or chicken, or any combination of meats you desire.
I used the meats I felt I would like best.

4 yellow sweet corns cut in half,

1. Place the Pumpkin in the oven on about 170 C and bake until soft. This should take about 30 minutes. Once soft and pliable; peel, cut in half and de-seed. Half will go into the stock, the other half can be put away; either stored in the fridge or frozen for later use. Cut the pumpkin in slices and add it to the pot at the beginning of cooking, so it will melt and form part of the soup's broth.

2. Fill a very large pot with water. Add Beef Bouillon, a whole onion peeled, garlic cloves, a bunch of cilantro, chopped Bell Pepper, chopped carrots, bay leaves. Bring to a boil for ten minutes then turn down to a simmer for about twenty minutes.

3. In the mean time. Fill a large plastic bowl with water and add a teaspoon of salt and stir. Prep and peel the Yam. Slice into the shape and size you desire and immediately add to the salted water. The same goes for the plantains. This will stop the yam and plantains from discolouring.

*If you decide to use other tubers such as yuca or malanga, the same thing would apply. Put them in salted water immediately after peeling.

4. Bring a large pot to a boil, (a different pot from the soup pot) add the yam, and plantains. Boil the yam and plantains on high heat til they are both cooked. This should take about twenty minutes, test with a fork as you would with regular potatoes. If the fork goes through easily on the yams they're done, but they should be still sturdy and not mushy-basically the consistency of boiled potatoes. Once they are done, remove from the stove and keep them in the water to prevent discoloration.

This will prevent discoloration.

With water and lemon. Sprinkle three tablespoons of soy sauce and 1 teaspoon of salt over the meat and rub these ingredients as evenly as possible into the meat. The Goat should have been already cut up to save you the hassle. Add the Goat and Oxtail to the pot first, as these will take longer to cook than the duck legs. Then add about three tablespoons of garlic butter oil. Bring pot back to a boil after adding the goat and oxtail, for five minutes, then turn back down to a low simmer, stir and cover.

6. Check after an hour and a half for salt and pepper. After two hours cut the duck legs in half, and then smaller pieces, before adding them to the simmering pot. Keep simmering until the meats are cooked. It is very important that you continue to check for salt and pepper throughout the process, and add according to your taste.

Add the corn about fifteen minutes before the end. The goat and oxtail should be falling off the bone tender.

To serve I suggest ladling large bowls with the sancocho broth and then add the meat, tubers, plantain, and corn according to your desire. Store in an air tight container. This soup should easily last for five days and it just gets better over time. The broth will dry up in the fridge, when this happens just add a 1/3 cup of water to the the bowl and stir before reheating. 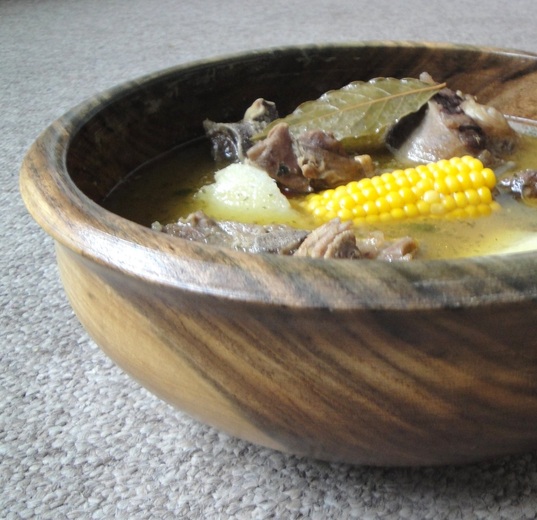